There are a hundred other things I could, & should, be doing right about now. But we’re both in the same boat if you’re reading this, so at least one of us should get started on something. One looming task I’ve been keeping at arm’s length has been cleaning up my craft house. What can I say? I’m a master procrastinator.

Much to my husband’s chagrin, two years ago I invaded & conquered the guest house. Dusty workout equipment had been occupying the territory for years & though I knew I would be met with much resistance, & eventually, much rebuilding, I took a deep breath & with my ferocious furry companion by my side, I charged in & began waging war.

The assault only lasted a little over two hours but, once the dust had settled, I could see endless possibilities on the horizon. Where a pile of free weights had once been could now become my wrapping station. The old warped & brittle hockey sticks haunting the small closet would be replaced with full beautiful rolls of seasonal paper, while larger families of seasonal decor could rest comfortably in clear labeled containers down below. The incline bench, a favorite torture device of the old inhabitant, would be replaced with a clean, smooth crafting surface held triumphantly at bar height on the shoulders of shelving units already assembled with my own bare hands. It was going to be my utopia!

Just as quickly as it became my utopia, the craft house was overcome with supplies & furniture for projects & storage. Purchases were made & bags tossed in & forgotten about for weeks on end. Sadly, chocolate snacks were abandoned & ultimately perished. I wanted space for everything & when everything began to overrun all the space it was too late. Chaos is the new ruler of the house & I only have myself to blame. 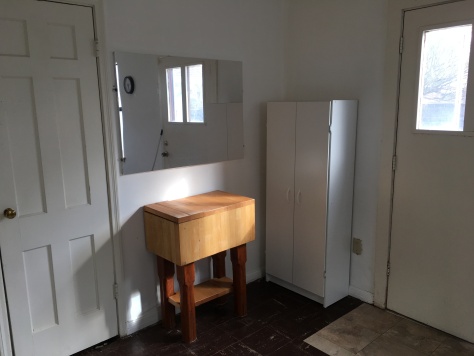 For now, it’s back to the drawing board for a new plan of attack. The mission is still the same: to divide the supplies & conquer the clutter; to create a functional space in the thick of a creative mess. I know I’d like a combination of open & closed storage, certain zones for specific kinds of crafts, & most importantly, I need a comfy space for my ferocious companion & his pint-sized side-kick, my three-year old daughter. Thankfully, I’m a hoarder & have been gathering supplies & furniture for this project over the last few years so my challenge will be creating a space by remixing & reusing everything I already have on hand & with whatever change I can scrape up out of the couch & from pockets in the laundry room.

So, with a free-rubber-band-you-got-from-a-neighbor’s-newspaper kind of budget & some elbow grease, I’m going to tackle the mess I’ve created for myself & try to create a space where I can escape & procraftinate alone or with friends. Every good cause needs a battle cry, so mine will be a quote I can hear my grandmother saying as if she were standing in the room; “Use it up, wear it out, make it do, or do without.” Onward!